A new start. Let’s kick-off.
Clarifying the new structure, processes, goals and strategy will be sufficient, won’t it?

Well … erm … no!
Unless your idea of a successful company is based on classical command and control mechanisms whereby all employees are “resources” to be manipulated in the interest of profits. In this case, such an approach may appear fine. Paradoxically, however, apart from being ethically unjustifiable, it is likely to result in profits that are far lower than they potentially could be.
Dear Reader, I hope that you, like me, are not in the least interested in manipulating people.

Kicking-off an initiative is a special event. It signifies a new start. It constitutes a unique one-time opportunity to spark and release the inherent potential of a group of people.

And if you need a kick-off, the context is highly likely to entail an …

Relatively few significant notions in the organisation world can be meaningfully expressed in binary terms. This is one of them.
When designed and implemented well, a kick-off adds value for everyone.
When done poorly, the destruction of value is the likely outcome.

Every new initiative kicks-off …
… implicitly or explicitly … well or poorly … with a spark or like a flat balloon.

A relatively small investment in time, energy and money, in designing and implementing a truly generative kick-off event can release the boundless potential of everyone in the organisation.

A successful kick-off works on generating quality relationships among people, to enable them to focus on and engage with the business together.

Structures and processes are undoubtedly important, very important, but presenting them is not nearly enough to encourage people to engage with them.
Goals are also important, as orientation, very important. Presenting them does not mean that everybody understands them in the same way, and is certainly no indication that managers and employees are going to work towards achieving them.
Most strategies sound perfectly rational until attempts are made to implement them. The true interdependent nature of the organisation then becomes visible. To implement a strategy successfully, your organisation needs to come to life.

All organisations are living systems, social and ecological systems. They are alive, relational in nature. The quality of relationships determines the quality of life within, thereby, the quality of work and ultimately results.

HOW do you want your Organisation to … BE?

… is the critical Question that leaders need to ask themselves.

Let’s look briefly at three contexts in which a focused generative kick-off event is essential for adding value: (1) A Corporate Acquisition; (2) An International Project; (3) A Conscious Corporate Culture Change.

Oliver was one of three founders and owners of a highly successful specialist software development company that was acquired by a global corporation. I’d been supporting them on a number of projects during the previous two years, and enjoyed the lively positive environment I invariably encountered. When he showed me the outline of the proposed kick-off meeting designed to integrate the company into the business of the corporate, I sighed. It was little more than a series of presentations with information on structures and procedures. People were reduced to performers, not invited to contribute. Oliver ignored my requests to arrange a joint meeting with the head of the corporate business unit, convinced he could handle any problems. Nine months later, he called me to see whether I could help rescue the initiative. Those employees who had not yet left were demotivated. Rescue was no longer possible. It was too late.
The value of the original investment had been reduced to practically zero.

A small investment at the start could have resulted in a dramatically different and positive outcome.

The project team comprised 30 people from 8 institutions, corporations and small businesses, located in 5 countries. Getting everyone aligned and focused was going to be challenging. Anna, the determined yet relatively inexperienced Project Manager called me on a recommendation. Intuitively, she understood the need to invite the whole project team to contribute to designing how they were going to work together to implement the project plan. We held a pre-project workshop with the leadership team, followed a few days later by an active whole project kick-off workshop. As the project came to its scheduled conclusion three years later, it was below budget and the results had exceeded expectations.

The project sponsor: “This is one the most successful projects I have ever supervised.”

Gerald had recently been appointed CEO of a medium-sized IT company with operations on three continents. He quickly realised how the existing hierarchy was preventing essential collaboration among business units, discouraging even nominal leaders from assuming responsibility for their work, and generally holding the company back. I was asked to design and facilitate the kick-off of this initiative with all members of the senior management group. This is what some of them said …

“We need to be aware not to underestimate the complexity of what we’re trying to do. Culture Change is not just a matter of making some decisions followed by a to-do list.”
“Free space – We’re forced to reflect and that’s good.”
“We should remember that most people here are engineers and used to working in an ordered manner. Culture isn’t ordered.”
“It starts with me.”
The CEO: “I could never have done what you did here. Without this, we’d never have been able to have such open conversations.”

Generating value for an investment entails generating value for everybody involved in the initiative. In corporate acquisitions, recognition of this principle is an essential pre-requisite for success. Inviting the active participation of everyone generates the trust necessary for engaging. The leader’s role in reflecting their message cannot be emphasized too strongly. Neither can we overemphasize the need for external facilitation to open the space that enables people to hold those crucial conversations that evolve the trust to release the potential of the organisation.

Every new initiative kicks-off …
… implicitly or explicitly … well or poorly … with a spark or like a flat balloon.
A relatively small investment in time, energy and money, in designing and implementing a truly generative kick-off event can release the boundless potential of everyone in the organisation.

A corporate acquisition is an Organisation Culture Change Initiative.
Its inherent complexity demands explicit recognition, including an appropriate launch (kick-off). 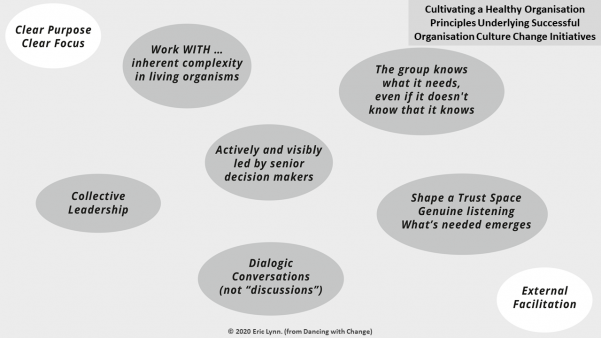 Photo
Conversations during a kick-off workshop, following the acquisition of a European technology company by a US-based global corporation.