There was a perfectly good business reason for the board decision.
Yet, from the moment the decision was announced, everyone resisted.
Admittedly, the board did not do a very good job of communicating the decision.

The three national subsidiaries of a specialist insurance corporation had been amalgamated into a new company. Each had been successful in its own right. Each had been working for many years with their own IT system that was functional, if far from perfect. They all found work-arounds for the functionalities that didn’t really work as intended. Nothing unusual here: It was effective yet highly inefficient in that not everybody within the subsidiary had access to all the information that supposedly informed their decisions.

Quite naturally, the board decided to integrate the IT systems of three national subsidiaries, which would enable alignment of business processes. This was a three-year project requiring the cooperation of everyone.

The problem was human and relational.

A decision had been imposed without any attempt to explain the rationale to those who would be affected. They felt like pawns and expressed this openly. All were highly skilled and engaged with their work. All identified with the company and a large proportion had been employed there for many years.

Their reaction to the decision made perfect sense.
And the project was stuck.

The Managing Director, who had worked with me previously, suggested the Project Manager contact me to act as a mediator.

How we moved from Resistance and Conflict to Alignment

Preliminary conversations with a number of influential employees from each subsidiary formed the basis for designing a 2-day intervention to be held in the grounds of an old castle. The 22 key players attended, some of whom had never met personally before. We defined the explicit intention as getting everybody aligned towards working as an integrated group for the success of the project, which was fundamental to the company’s business.

Focus, clarity and orientation are essential. The decision to implement the project was not up for discussion. The goals and purpose of the project needed to be understood by everybody in the same way. The structure of the project needed to be clear to everybody. Individual roles and responsibilities were assigned according to know-how and experience. The whole project, including its context within the corporation’s business, provided the contextual focus.

And there remained the challenge of relationship.

To enable alignment, within this initial environment of conflict and resistance, the workshop design, all activities, the voice and deeds of the facilitator had to mirror the intention and explicitly recognise the uniqueness of each individual in the room. Everybody had an equal voice. Decisions were made and owned by the group. I perceived this intervention as a mediation in which I as facilitator owned absolutely nothing, not even the event design, informing the group they were free to propose changes at any time as long as the integrity of the project’s intention was not compromised.

We played with identity, perspectives, culture, needs, history, the technology, the challenges … although these were of course not games. In doing so, we established … that perceived differences in interests were not so different after all; that the animosities directed towards other colleagues in fact comprised animosity towards the manner in which the corporation was dealing with them as humans – they felt objectified; that they all indeed recognised the benefits of undertaking the project; that they were all interdependent upon one another.

We held dialogue rounds; we had fun with activities that illustrated the inherent limitations as well as the absurdity of categorising people, and the dilemmas these categorisations confronted everybody with. Everybody and everything had space. Then the group threw their assumptions, categories and anger out of the window and got down to work, focusing solely on getting the project up and running.

We worked low-tech, enabling focused interaction, and the facilities included nothing more than flipcharts … so we used the floor … which anyway is the space on which we move and interact together.

By the end of the two-day workshop, the group had not only put down a concrete foundation for moving forward including the next action steps, they had aligned, committed to playing an active role in ensuring the success of the project and established a pretty good level of trust in the intentions of one another. 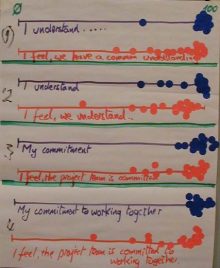 We provided clarity, focus, orientation and above all space, including space and skilled facilitation to enable focused human interaction.
We provided no solutions, proposed no methods, employed no tools, assumed nothing.
The whole approach was relational. After all, an organisation is a living organism, therefore, the quality of all organisational interactions depends to a large extent upon the quality of human interactions.

You may download this post as a pdf, here: Group Mediation – Moving from Resistance to Alignment Fast