Where to focus … and Myths of Change?

Where to focus … and Myths of Change?

I remember well a trouble-shooting workshop I facilitated some years ago for an international project team facing huge problems of their own making. Basically, they were failing to meet targets; they had the wrong people in the wrong places; quality was unacceptable; the client was not merely unhappy, they were threatening to cancel the contract. They had to change and to make changes, and they knew it. My brief, negotiated with the head of the steering committee, was to enable the team to focus, quickly, on what they really needed to do to correct the current mess, while leaving the space for the inevitable conflicts to come out in a constructive environment.

The group’s challenge and this assignment was all about making changes. Yet interestingly, during the workshop, not one person mentioned the word “change”. There was no reason to.

“Change” was not the focus of this intervention and quite rightly so. They focused on what they needed to do to get back on track.

Change is not about “change”.

A healthy change initiative is not about “change”.

If “a change” is the primary motivating factor driving the initiative, I would strongly suggest reassessing the intentions beginning with the Question, “Why are we doing this?”

A healthy change initiative should be about the desired environment you wish to shape … in your specific context.

If the initiative is merely about a “change”, it becomes meaningless.

Research over decades has highlighted that the most stressful experiences most humans are likely to encounter in their lives are, (a) the death of a close family member; (b) divorce. Both of these situations automatically bring significant change to a person’s life.

Three decades ago, while going through a divorce, my whole life was in upheaval. The stability I’d imagined I had was simply no longer existent. I was living change. However, I cannot recall even thinking about “change” at the time. Why would I? I was preoccupied attempting to bring some new order into my life … and this is precisely where I focused.

In 2004, I made a conscious decision to take a break from professional life, and leave Europe to live for a while in Asia. I sold or gave away everything I owned. My decision was not about making a “change”, but gaining new experiences while taking the rest that I felt I needed.

While I was working closely with the Managing Director of a German engineering company on an initiative to reshape their corporate culture, we didn’t focus on “change”.

His appointment to the role, my visibility on site as an external consultant, the explicitly communicated intentions of our work, the way in which we invited engagement from everybody, all constituted a significant change in the environment that employees and other managers had become accustomed to.

Our focus was clear and explicit, and also openly communicated throughout the company: “How we could achieve a turnaround so that the company once again became profitable, while evolving into a place where everybody – employees and management – wanted to work?”

A generative change initiative is not about “change”.

It is about shaping the desired environment which enables desired outcome(s). 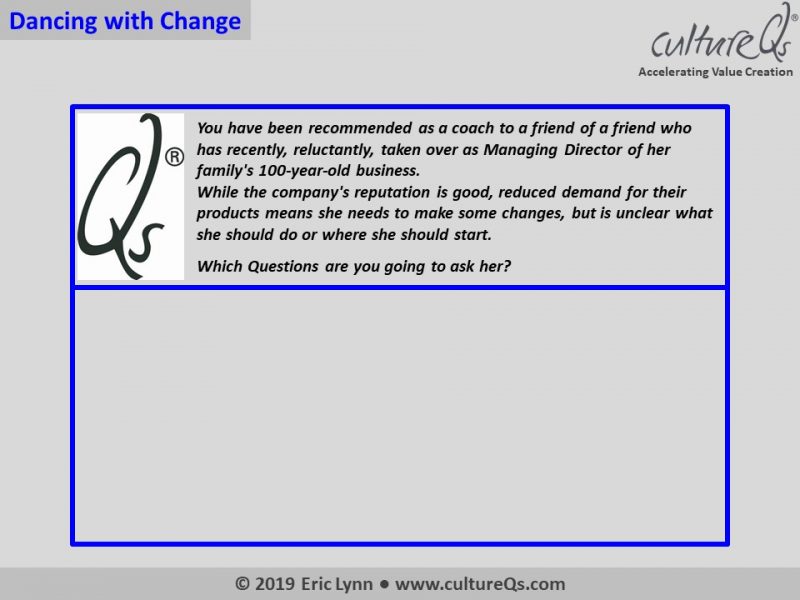