Why we need Personal Stories rather than “Storytelling”

Why we need Personal Stories rather than “Storytelling”

Story telling has become somewhat of a fad in recent years, and I do understand why this is. After all, human beings have related and exchanged stories since the earliest days.

Stories are how we make sense of the world, how we socialise, how we learn from others, how we express ourselves.
Good bookshops are full of stories, some simple even banal, others full of wisdom. We buy those we feel attracted to.
In organisations, their use as a motivational mechanism has grown exponentially during the past 20-30 years as leaders and consultants realise their attraction and power.

On the one hand this is wonderful; on the other hand it has become problematical, in that it can be a somewhat reductionist approach.

Storytelling frequently focuses far too strongly on popular fables that reflect peoples’ idea of wisdom.
I recently attended a half-day workshop which was reputedly about relating though stories. It began with a young refugee telling the story of her parents fleeing a war zone, how she grew up in a space between two very different cultures, how she became curious about “the other side”, visited them, made friends and co-started a movement focusing on peace rather than conflict. Every sentence conveyed the emotions of the multiple interrelated threads she was weaving while sharing her personal life with us. There were no sides, there was no blame, no fault. This was her life, uncategorisable in any meaningful sense. I had heard her story before, enabling me to understand her motivators. Even so, it was still very powerful … moving.

This approach does not enable people to relate. It is not the way to develop meaningful relationships.

Only if we create the space to listen deeply to one another can we hope to evolve the deep relationships that are a prerequisite for shaping generative societies and organisations.

Personal Stories go to the roots of our being, revealing the patterns that make us who we are today.
Here is one example of a Question from cultureQs that encourages groups to share their personal stories … 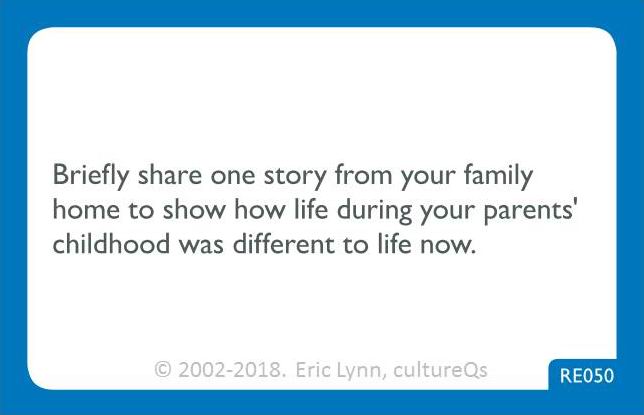 Try it with a friend, using just one fundamental rule: don’t interrupt one another while talking.